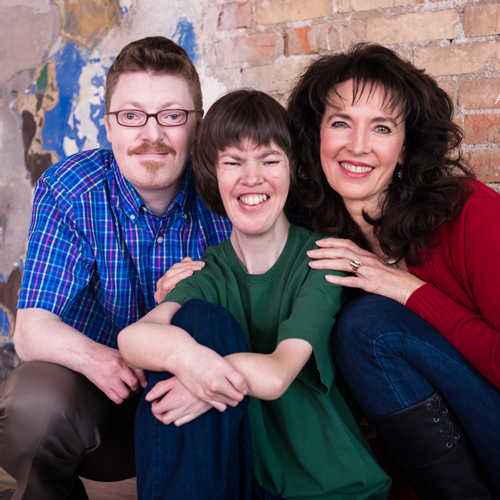 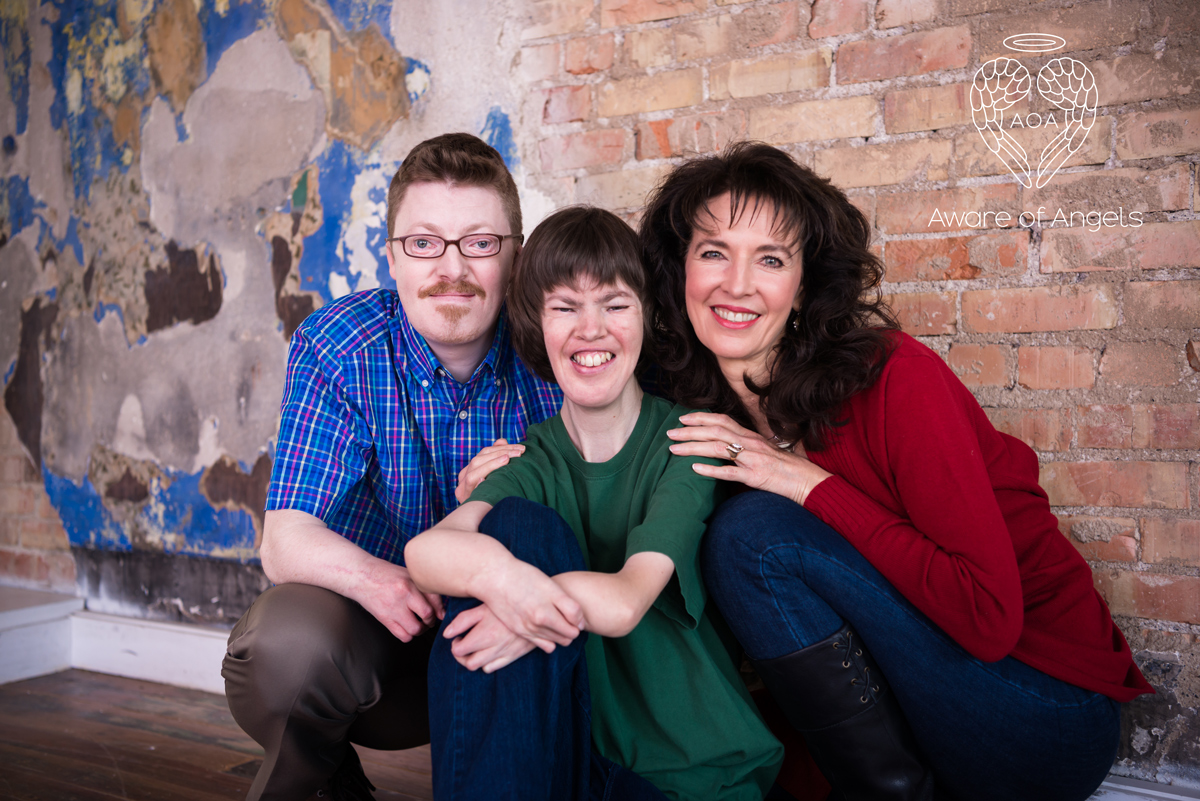 “Heather Madsen, an illuminating writer and speaker with multiple disabilities who relates her struggles and challenges and how she transforms them into deliberate creations of joy, through appreciating the simple beauties of living.  Heather is published in the book Eight Fingers and Eight Toes: Accepting Life’s Challenges by her mother Debbie Jorde, and in the book series Desert Wanderings, published by Art Access Gallery in Salt Lake City, Foundation for Nager and Miller syndrome (FNMS) Newsletter, and the Salt Lake Tribune newspaper.  Heather earned a BS degree in Psychology from the University of Utah.”  -Heather  http://www.debbiejorde.com/about-us.html 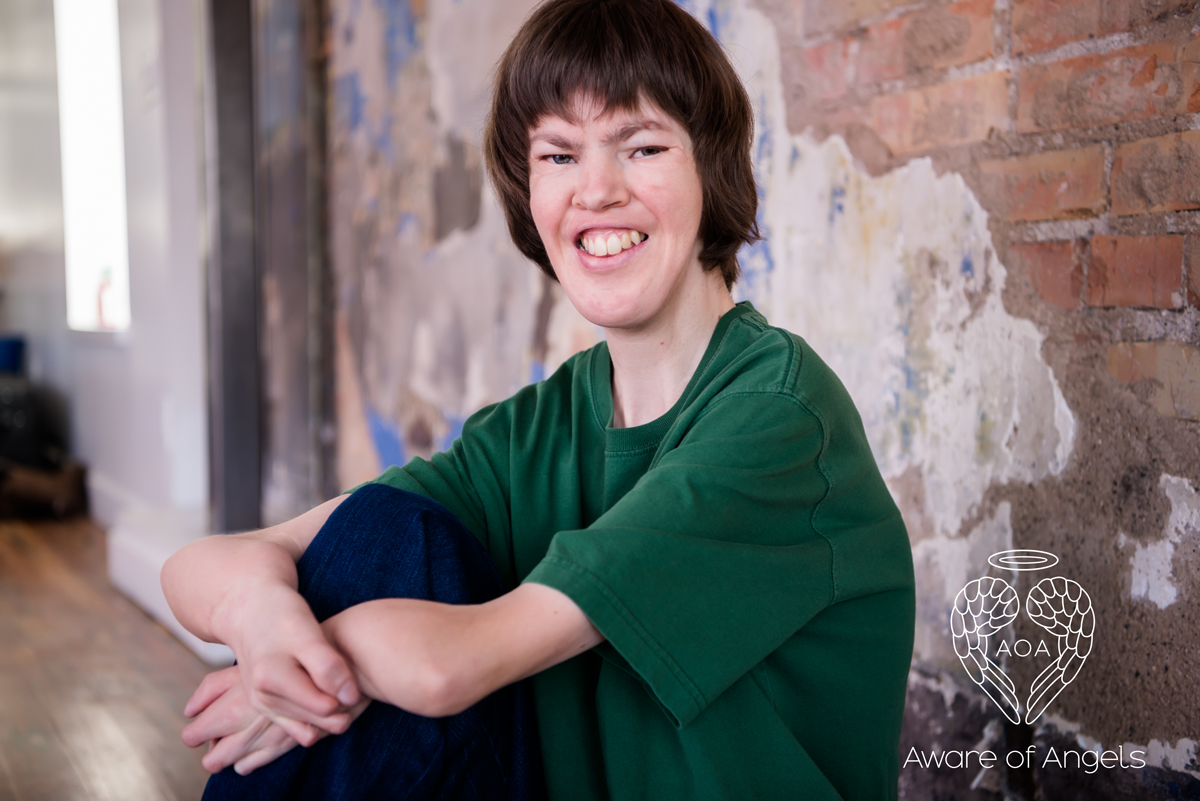 “I am aware of my differences and how they impact the experiences of other people by teaching them about diversity and showing them it is possible to face challenges and still enjoy a happy life. I am learning to love myself as I am, accept and love my differences, and be comfortable with myself.”–Heather Madsen, 33, writer

“Heather was born with a visible and rare genetic condition called Miller Syndrome, which affects only thirty people worldwide. Her non-visible challenges include a rare genetic lung disease, hearing impairment, ADHD, and autism.” -Debbie
“For 20 years, Heather has addressed first year medical students at the University of Utah about how her disabilities affirm the human spirit in medicine, other groups at the University of Utah, caseworkers at the Department of Workforce Services and Utah Department of Vocational Rehabilitation Services, and at local libraries.  As a keynote speaker for Autism Speaks in 2011, she shed light onto some complexities of autism. Recent speeches about seeing beyond appearances, accepting challenges, and insights into communication produced transformational results for audiences.” -Heather

“Heather enjoys speaking publically and looks forward to future opportunities to make a positive difference through sharing her story.” -Debbie 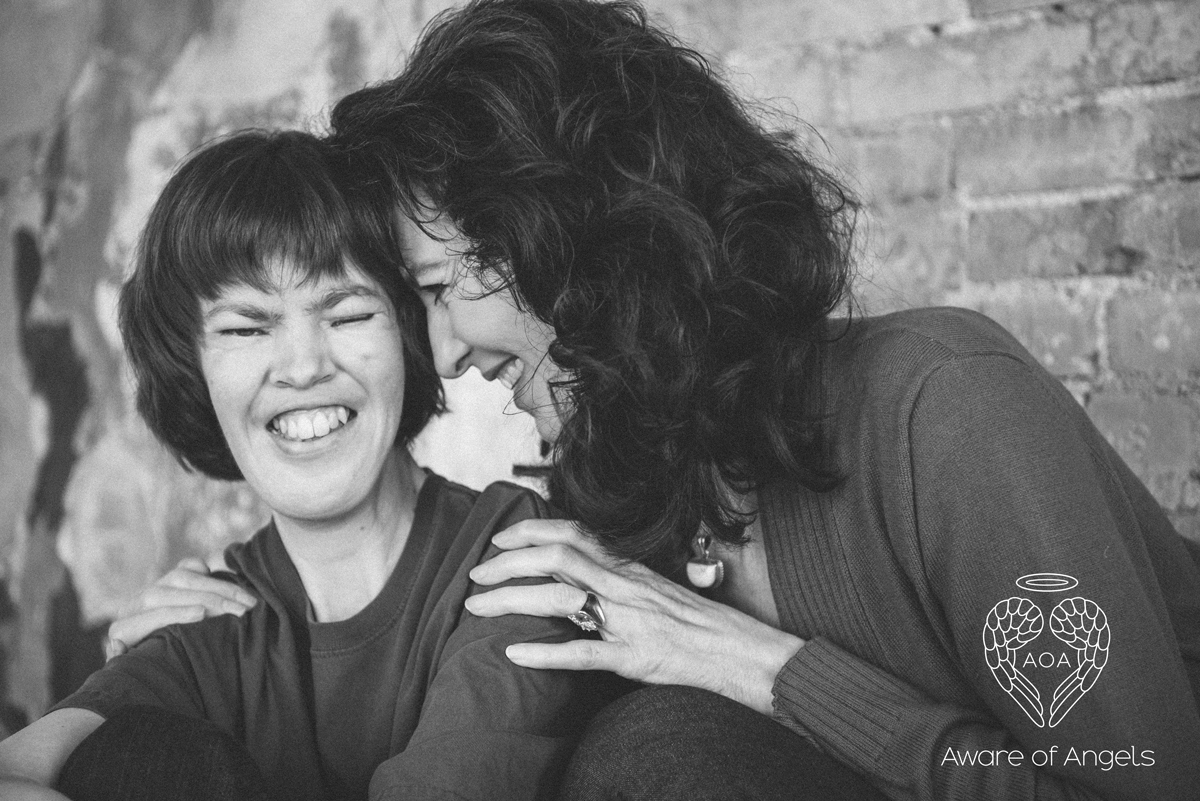 Hi, I’m Heather! Welcome to my writings page where I share insights from my experiences with overcoming challenges.

I focus on details which highlight the beauty in the ordinary, creating gratitude for everything in life, even the struggles.

This consciousness reminds me what I am living for, reconnecting me to my humanity, the joy of exploring this life, and my life’s meaning and purpose.

I write about what living with Miller syndrome, hearing impairment, autism, and a genetic lung disease have taught me about myself and other people.

My prose and poetry shed light on the meaning of life, relationships, diversity, acceptance and unconditional love.

Come with me on a journey through emotions that connect us all, the struggles and joys we all share, and the oneness of life.

I hope my writings will influence how you see life, people, and most importantly, the relationship you have with yourself, leaving you forever changed.

There is so much to live for.    ~Heather Madsen   http://www.debbiejorde.com/about-us.html 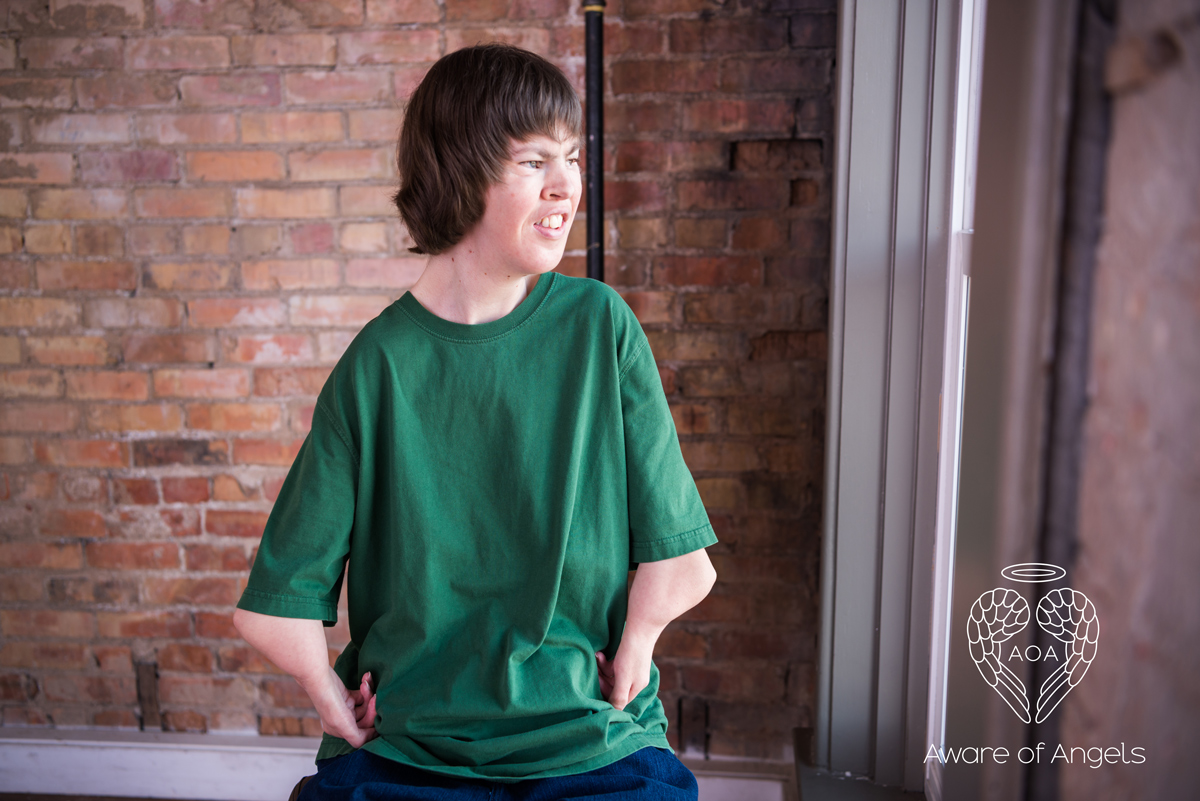 “Logan Madsen is a 36 year old self-taught-fine-artist from Salt Lake City, Utah with I AAS in Graphic Design/Multimedia. He lives alone, with his dog Charlie. Logan lives to create art!  He spends a few hours each day painting in his home art studio. He finds his voice on canvas, and soon on film in his documentary, “Logan’s Syndrome,” due out summer of 2017. Logan has a rare condition called Miller’s Syndrome(less than 30 documented cases worldwide) which affects muscle and bone formation, causes hearing loss and a few organs. Additionally, he has a lung condition and Autism Spectrum Disorder(ASD).  His older sister, Heather, suffers from the same disabilities.  In 2010, they were the first family in the world to get our entire DNA genome sequenced.  Scientists found that Miller Syndrome is a recessive gene.  They also found Primary Cyliary Dyskinesia(PCD) –also a recessive gene- which is the cause of our lung disease, and other attributes here and there.” -Debbie  http://www.loganmadsenfineart.com/ 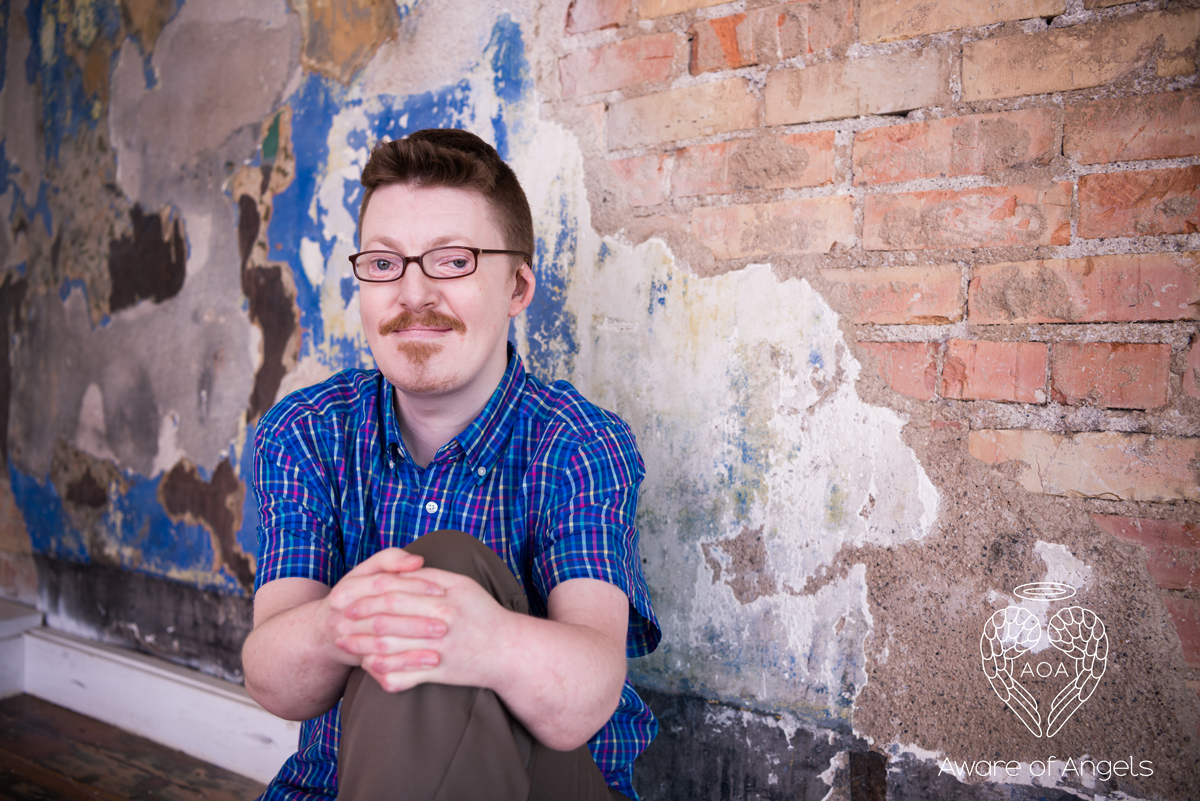 “Logan has exhibited his art at Art Access Gallery in SLC, UT. In his recent exhibit “Syndrome Psychology,” in spite of physical limitations and the pain they cause, created stunning, hyper-realistic paintings which explore himself, visually expresses what it is like to be Logan Madsen.” -Debbie

“He loves to create things with his hands and mind, and often redesigns household items to be more ergonomically useful for his use in regards to his physical limitations.  He has a rare condition called Miller’s Syndrome (less than 30 documented cases worldwide) which affects muscle and bone formation, causes hearing loss and a few organs.  Additionally, he has a lung condition and Autism Spectrum Disorder (ASD).” -Debbie  http://www.debbiejorde.com/about-us.html 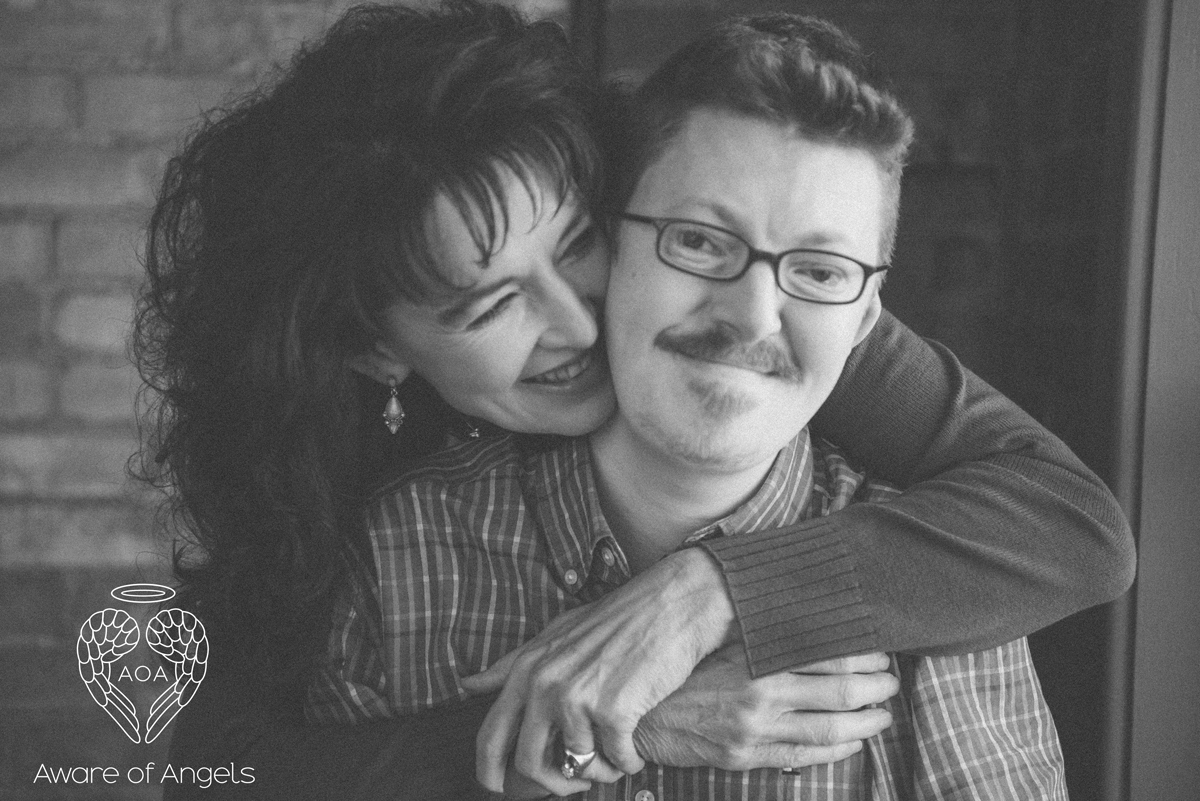 “In 2010, when scientists found the disease causing genes to be a recessive gene, Logan was excited to know he could have unaffected children, should he have the opportunity.  He was also excited about “paving the way” for other people to gain answers to their unknown conditions when he became one of the first family in the world to have their entire genome sequenced.  He likes the feeling of helping other people and “putting his bookmark in making history.” -Debbie

“Logan is insightful, brave, funny, charismatic, smart, talented, passionate, thoughtful and strong person. His self-awareness and self-actualization surpass many people.  When he speaks publically, about accepting and overcoming challenges Logan mesmerized his audience with insight and humor, which brings him satisfaction and purpose.” -Debbie“When I see somebody who looks different, I want to inspect them as much as I can.  Clearly, it’s not nice to stare, but WE ALL WANT TO.  I wish I could touch them, talk with them, understand them, but it’s too risky.  I might offend them or get stuck having to be overly charitable in my efforts to save face. What if they are clingy?  I don’t know their mental capacity.  How do I to relate to someone who looks so weird???  It’s kind of gross and alien-like. Some may say “This is too hard for me to deal with.” Others might cringe and pray to God that “weirdo” doesn’t look in their direction.” -Logan 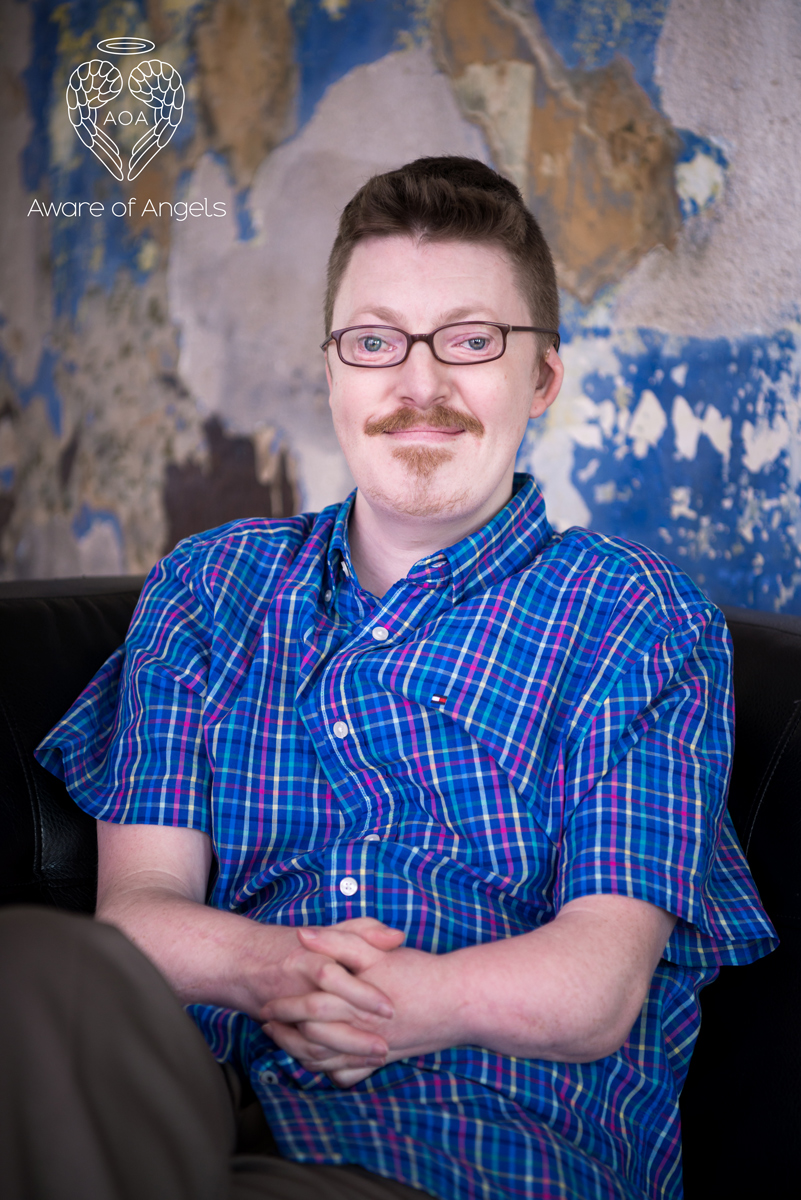 “Debbie Jorde is a motivational speaker and author who shares her inspiring stories about accepting and overcoming life’s challenges on her website http://www.debbiejorde.com  Her first book, Eight Fingers and Eight Toes: Accepting Life’s Challenges, written in an effort to inspire and motivate others, details how a single mother dealt with the difficulties of having and raising two children with a rare and previously unknown syndrome, which affects only 30 people worldwide, and causes severe physical disabilities and hearing loss, and was later named Miller syndrome. Her children also have a chronic lung disease called primary ciliary dyskinesia (PCD), autism, ADHD, OCD, depression, and chronic pain.  While problems surrounding her children’s health issues are the centerpieces of her book, divorce, single motherhood, and an eating disorder also play a pivotal role.  Debbie has been published in Parents Magazine, Foundation of Nager and Miller syndrome (FNMS) newsletter and is currently writing about new insights gained while overcoming challenges due to having multiple sclerosis (MS).  Debbie and her family have appeared in New York Times, Los Angeles Times, Salt Lake Tribune, Deseret News, and countless broadcast and online news outlets.  Debbie has spoken publicly for over 20 years, she has appeared before university groups and medical students, CEOs of major institutions, government institutions, community organizations, inspirational forums, community groups, and public libraries.  Debbie is available for motivational speaking engagements and guest writing on other inspirational websites.” 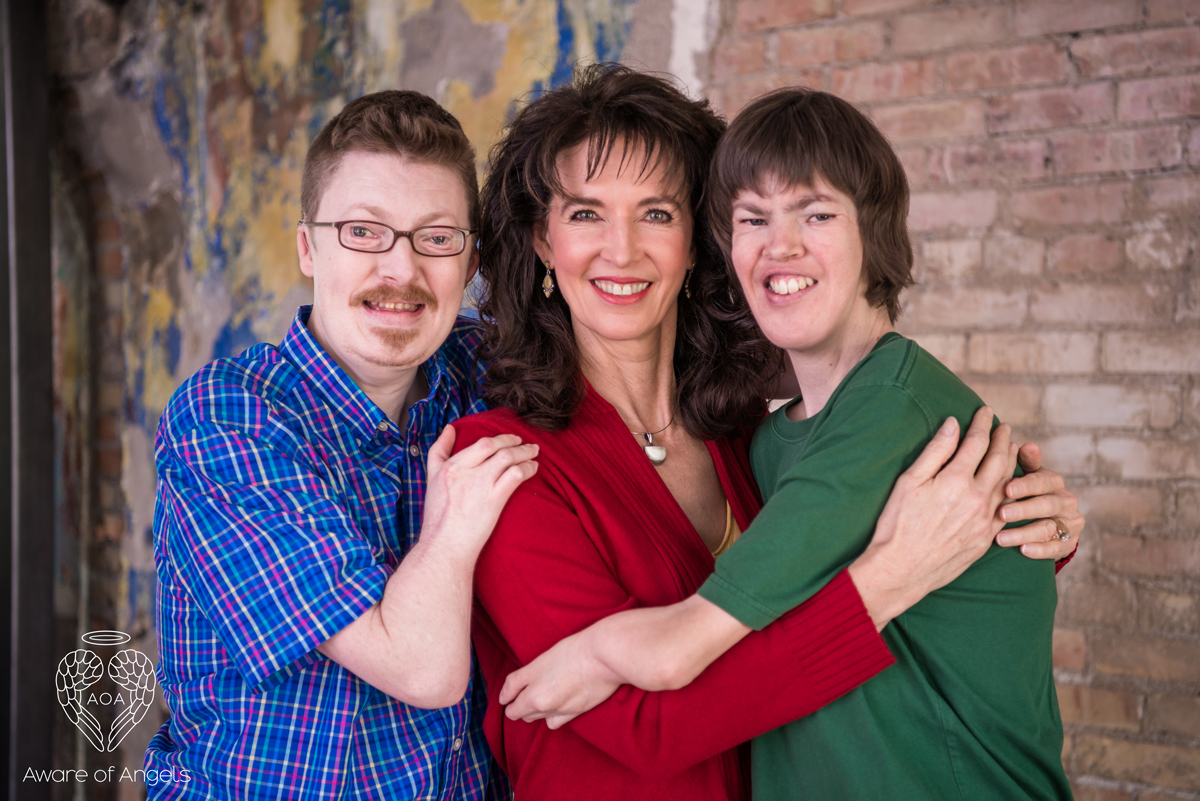 “After graduation, came barber school.  Helping feel good about their hair so they could feel good about themselves made me happy.  Being a hairstylist allowed me to stay home, raise my kids, and gave me a social outlet.  Never did I imagine how perfect the flexibility of this career would become for me, as I later became the single mother of 2 children with rare Miller syndrome; causing multiple disabilities. They also have a lung disease, autism, ADHD, OCD and depression.” -Debbie

“Married in 1976 at the young age of 20, my daughter Heather was born at 21, with unexpected, very obvious, short bent arms, and small hands with only three bent fingers and a thumb, a cleft palate, small cup-shaped ears with deafness, missing lower eyelids, and multiple other problems, later named Miller syndrome.  I couldn’t believe this was happening to me!  When Heather was 18 months old, geneticists told me this would never happen again.  Three years later, my son Logan was born, on April fool’s day (can you believe that) with exactly the same problems!  Now in their late 30’s, they have had over 55 surgeries between them.  When they were only 6 and 3, their father deserted us and I was left as a single mother.” -Debbie  http://www.debbiejorde.com/about-us.html 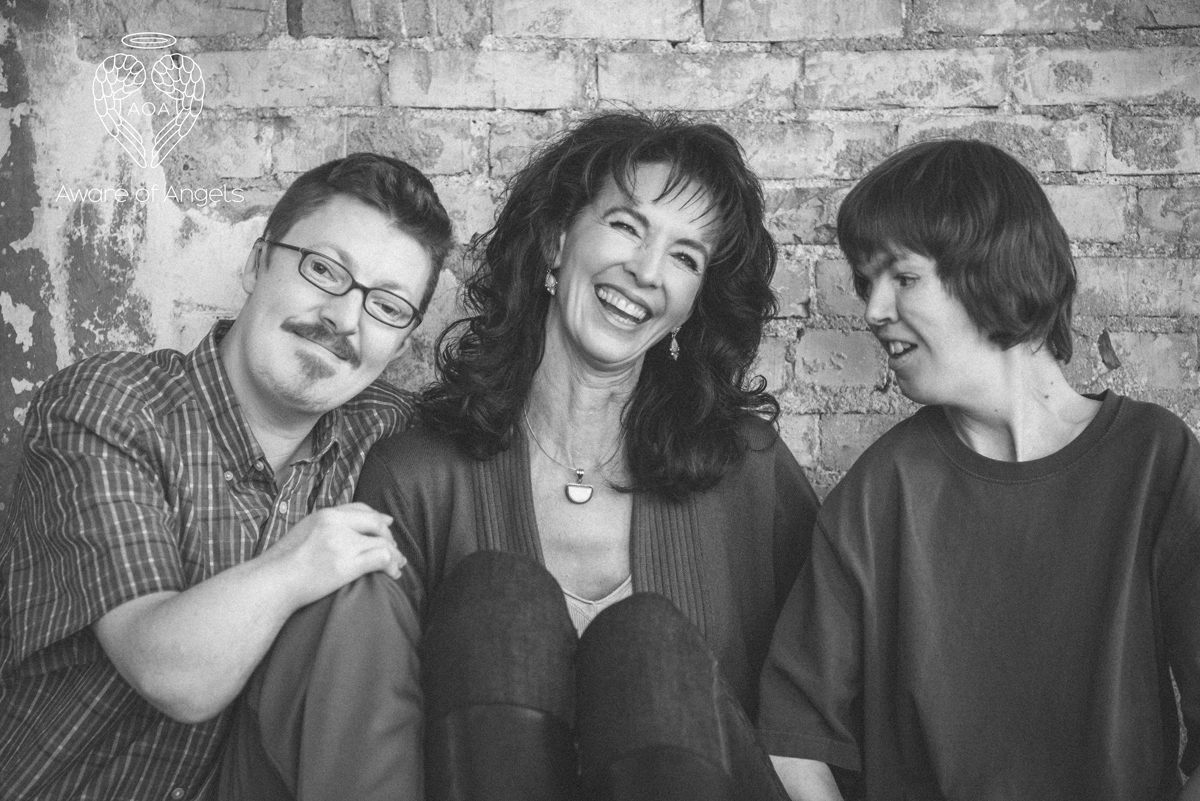 “Today, at 60 years old, I look back and realize that everything I went through, and am still going through, has sculpted me into the woman I am today.  Compelled to share the valuable lessons I’ve learned as I have moved through my challenges, I wrote and published my memoir, Eight Fingers and Eight Toes: Accepting Life’s Challenges.” -Debbie  http://www.debbiejorde.com/book.html“After living 32 years without answers as to why Heather and Logan had Miller syndrome and a lung disease, scientists found the disease-causing genes in both their dad and me, making each disease a recessive gene with one in four chances of recurring in each pregnancy.  Through sharing personal stories of accepting and overcoming challenges, and lessons we have learned, we experience connection with people, and gain personal rewards of making a positive difference.” -Debbie
“I encourage you to visit their websites:  http://www.debbiejorde.com/home.html & http://www.loganmadsenfineart.com/ to read more of their stories, view videos and see Logan’s amazing art! They are such an inspiration.”  -Season