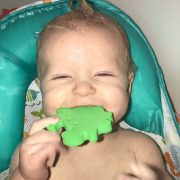 How Having An Undiagnosed Disease Almost Cost My Son His Life.

John Riley is 10 months old and currently “undiagnosed”. To date he has Aspiration issues resulting in 100% gtube dependency. He has dysphagia and was also born with a type 1 laryngeal cleft. He now has chronic lung disease due to aspiration. He has global developmental delays and scored “very low” in all areas of development at 8 months old with his assessment with neuropsychology as well as moderate- severe hypotonia with no known cause. He has atrial septal defect, prearricular pits and hyper mobility. John Riley attends a medical facility daycare monday-friday and receives PTx2 weekly, ST 2x weekly and OT 1x weekly. He is making great progress and can now tripod sit for small amounts of time as well at get on all fours and “scoot”. He still wears out very easily but we are so proud of him!

But let me start from the beginning.

John Riley was born on April 15th 2019. The pregnancy was unremarkable. All ultrasounds were good, all labs and genetic tests were normal. I was induced at 37 weeks for high blood pressure. John Riley presented with a shoulder dystocia and was born blue, limp and with no reflexes. His APGAR was less than 5. After working on him and bagging him John Riley perked up and seemed to make a “miraculous” turn around. He was monitored at the bedside with me. John Riley would not latch. But even from the very first bottle something was “off” to me. He made awful noises which I now know as stridor. I expressed my concerns but was dismissed since his oxygenation levels were good. We were sent home 3 days later. The first few week of life were hard. John Riley choked on bottles, screamed 24/7, refluxed and struggled constantly. I took him to a pediatrician.. and then another and then another. I showed videos of him taking bottles, I was concerned with his breathing which I now know he was retracting at baseline and head bobbing- but I was dismissed. “He’s gaining weight” “He has colic” “You’re feeding him too much and its causing reflux” “Newborns breathe weird, mom”.

At 8 weeks old John Riley turned blue after eating and went into respiratory distress which landed us in the children’s hospital. This started a journey of many many many tests and few answers. He was found to have an atrial septal defect that was non related to his breathing issues. He passed his first swallow study at 10 weeks will mild penetrations. They did a scope and found his type 1 laryngeal cleft. We were sent home on thickener after an injection into the cleft.

His outward swallowing seemed to improve but the retractions continued to happen on and off. 6 weeks later he had another injection because I was concerned he was regressing.

He woke up a different baby. He was turning colors, desatting and making the worst noises while breathing. They blamed it on the surgery and said he was getting sick. His chest X-ray was clear and his oxygen was good. We were sent home with breathing treatments the day after our injection, August 29th. On August 30th I took him back to the pediatrician. He was retracting terribly. I was told his oxygen was fine to continue breathing treatments because the virus would have to pass. That afternoon I took him back to his ENT. They sent us home. August 31st- a day that is burned into my brain- John Riley tired out and was looking very scary. I took him to the ER where he was intubated at 5 months old. He tested positive for Rhino Virus. Drs tried to blame it on the rhino virus. I tried to explain that he had been having breathing issues and swallowing issues since birth- but once again because of his weight gain and oxygenation and “extensive work up” I was dismissed.

After 5 days on a ventilator, John Riley was much better and was extubated. We were sent to the infant floor. He was given a bottle by mouth and immediately went back into distress resulting in going back to the PICU on high flow oxygen. Finally, they listened. We got another swallow study a week later. John Riley failed on all consistencies. Doctors were stumped. Why was he worse and not better? About this time I had begun pointing out how “floppy” he always felt. Neurology examined him and dx him with Hypotonia. We were then referred to genetics since he had regressed, had a laryngeal cleft, an ASD and hypotonia. We also became 100% gtube dependent at this time and has a Nissan preformed for his reflux.

The drs say “The tests don’t match the patient” Since then, John Riley has been in and out of the hospital and PICU multiple times for respiratory distress and procedures – likely because of the chronic lung disease he now has from aspirating for 5 months. He now has many developmental delays and still cannot swallow despite having his cleft repaired. We have gotten second opinions at Cincinnati Children’s hospital but remain undiagnosed. Genetics at Cincinnati believes that John Riley has some type of very rare genetic disorder- possibly one that has never been discovered before. We go back in April around his 1st birthday for more extensive genetic testing. Procedure and testing history: 10+ airway scopes Laryngeal cyst removed 2 MRIs 1 CT Nissen Fundiplication and Gtube placement 4 intubations outside of surgeries Laryngeal cleft repair 2 cleft gel injections

Aware of Angels & the NFL?