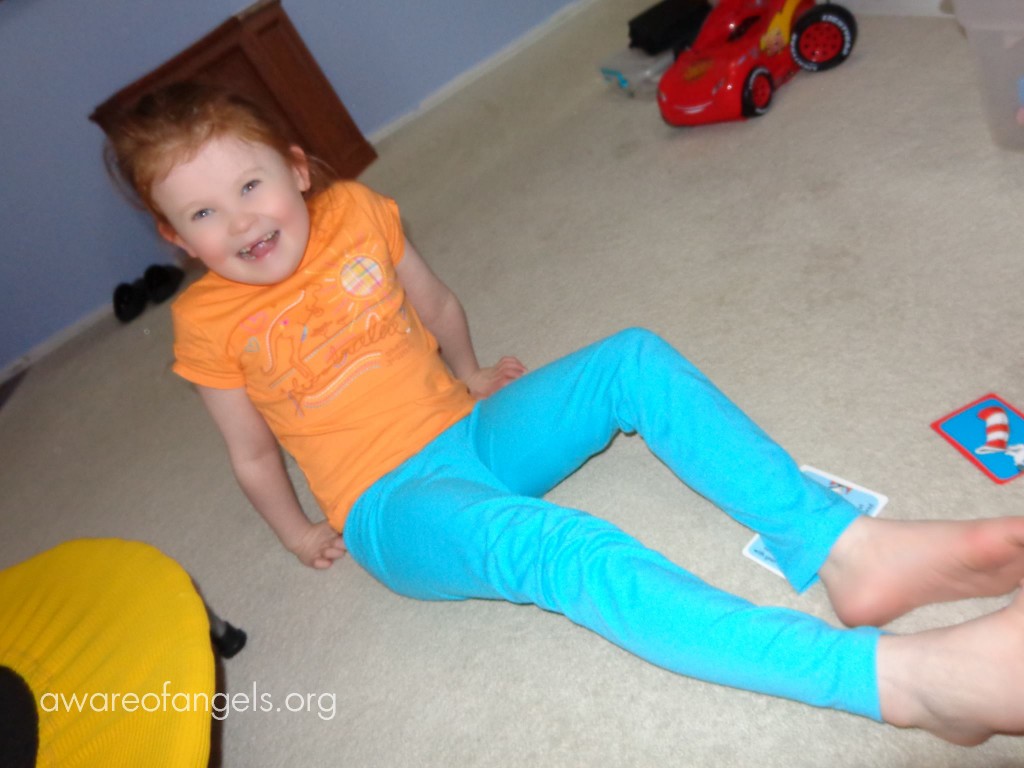 My almost 7 year old daughter Julianne Belle was recently diagnosed with the micro deletion 2q23.1.  This came as both a shock and a relief since we have known since her birth that she was “different”.  To go back to her birth I had a healthy pregnancy and delivered a normal sized breech baby by c-section at 39 weeks.  She was not able to hold her own body temperature and was jaundice but we were told that was normal.  Julianne was born with a very flat back of the head.  She nursed for 2 weeks and then refused breast milk for formula only.    She was colicky and screamed often.  She also slept quite a bit and didn’t seem very alert even months later.  She missed all the milestones but the big ones were eating table foods, crawling, walking, and talking.   We did not have a helpful pediatrician at first so for the first 2 1/2 years I was told all her delays were my fault for being an at home mom and not putting her in preschool.  We knew this was not true but this was our first child and we were new at this so we felt very lost. 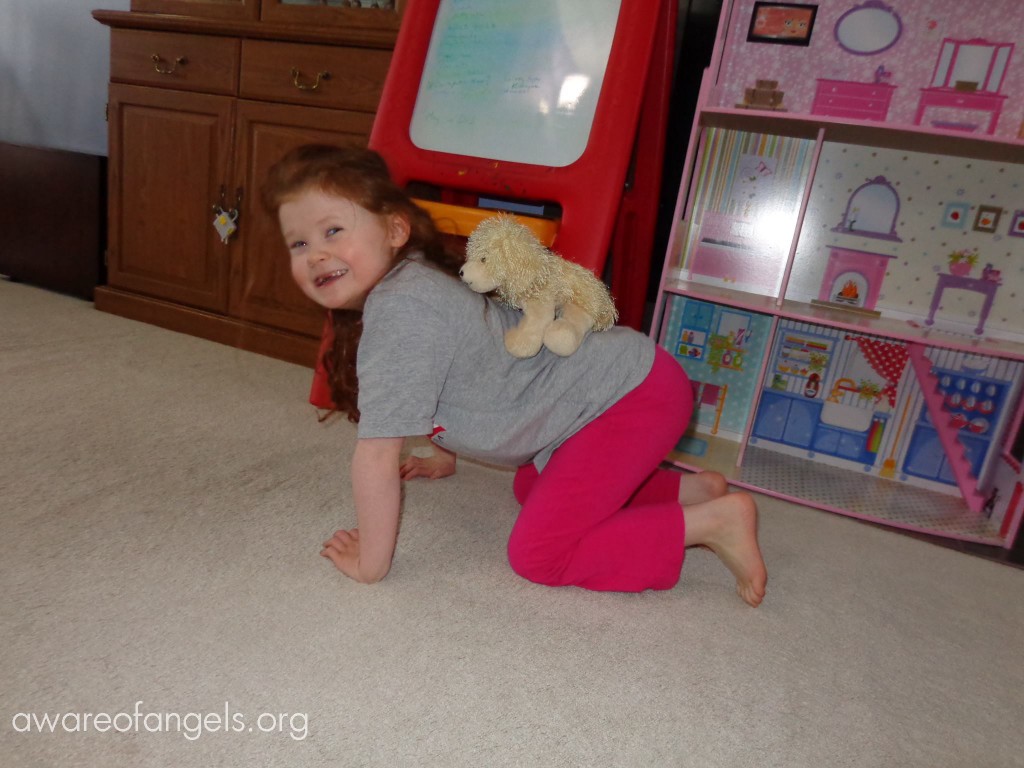 At almost 3 Julianne was diagnosed with classic autism.  This was a very very tough blow.  I didn’t know anything about autism but we learned.  The problem was it didn’t feel quite right.  We would say Julianne had “autism plus” because she also had this major feeding issue.  Julianne even now at almost 7 can not eat pieces of food and chew them only pureed food she can suck off a spoon or drinks from a straw.  After the diagnosis I put Julianne in everything from occupational, speech, feeding, horse riding, dance to gymnastics.  Julianne was on the waiting list for a medicaid card and a savings bond for products.  Due to her severe abuse like biting her hands, pulling out her hair, grinding her teeth in half over the years, and hitting others she was accepted in the medicaid program at age 3.  At age 6 the state required her I.Q. to be tested and it was 106 so she was immediately terminated from all benefits because her number was higher than 70 (mentally challenged).  When I had been taking her to all these classes and meeting with case workers every month one lady gave me a number to a doctor named Dr. Jerry Taylor who works with kids with autism to improve their behavior through diet.  I also had heard about these talking shots that DAN! Dr’s like him could offer us.  So at our first visit with him he showed us a video of a couple who were explaining how their child had regressive autism and had changed and how tragic it was for them.  At the end of the video they said they had done biomedical intervention and he was so much better now.  Then their son came on the camera and they asked him to pick a song and he thought and sang “Twinkle twinkle little star”.  Then his parents said thank you and he left and the dad cried when he told the camera how amazing that really was how this boy with autism thought of his own song and nailed it.  So we were on board and willing to listen to Dr. Taylor.  The problem was all these visits and supplements are not covered by anything unless they were a prescription and most were not.  We tried anyway.  We did urine tests and found she had no vitamins sustained in her body at all like she had never had nourishment before.  She had heavy metals (from the shots) like mercury, aluminum, lead, and arsenic.  She also did not have good levels for detoxifying her own body.  So the plan was to build up her nutrition to make her strong enough to kick out some of the toxins in her body.  We supplemented and then treated the bad stuff and saw her behavior changing immediately.  We got more eye contact, more understanding, better sleeping at night.  She learning sign language and some pecs.  Julianne always loved when i would read to her so we did this a lot and very young she was learning the sounds of letters.  After a short time of this biomedical Dr. Taylor said it was time to try the B12 vitamin shots.  The were for me to give her.  Yea that is just what i wanted to give my crazy child every 3rd day.  We did and only after a few months when we increased the magic happened.  SHE TALKED!!!  Not just a little but sentences and all the things she would sign  had words.  For a little while we did signs with words and then we dropped the signs.  Her words are rushed and mumbled and she is limited verbally and wants to just say yea or milk but I expect her to say full sentences everyday and she does.  One month after she spoke she started sounding out signs in public and she learned EXIT.  That was her first word that she read.  Then an explosion of reading began and she could read it all at about a 12 year old level.  She was very gifted with this.  At 3 years old I video taped her  not only talking but reading now too.  She would repeat back a book we read to her exactly and had a very sharp memory.  Her comprehension was not so good though.  She didn’t understand why characters in a book were mad or happy or what would happen next.  She also doesn’t understand dangers.  She never looks down when she walks and is very wobbly so she falls and runs into things but the worst is she will try to walk off those 8 foot edges on the play equipment at the park.  I am very careful to keep her with us and safe at all times.  My husband has been a big help.  Every day they have daddy daughter play time and she knows it.  She hates when he has to go out of town and they can’t.  She loves play/doh, stickers, and books.  She will bite (but not really chew) paper and panic to be rescued but not eat table food still. 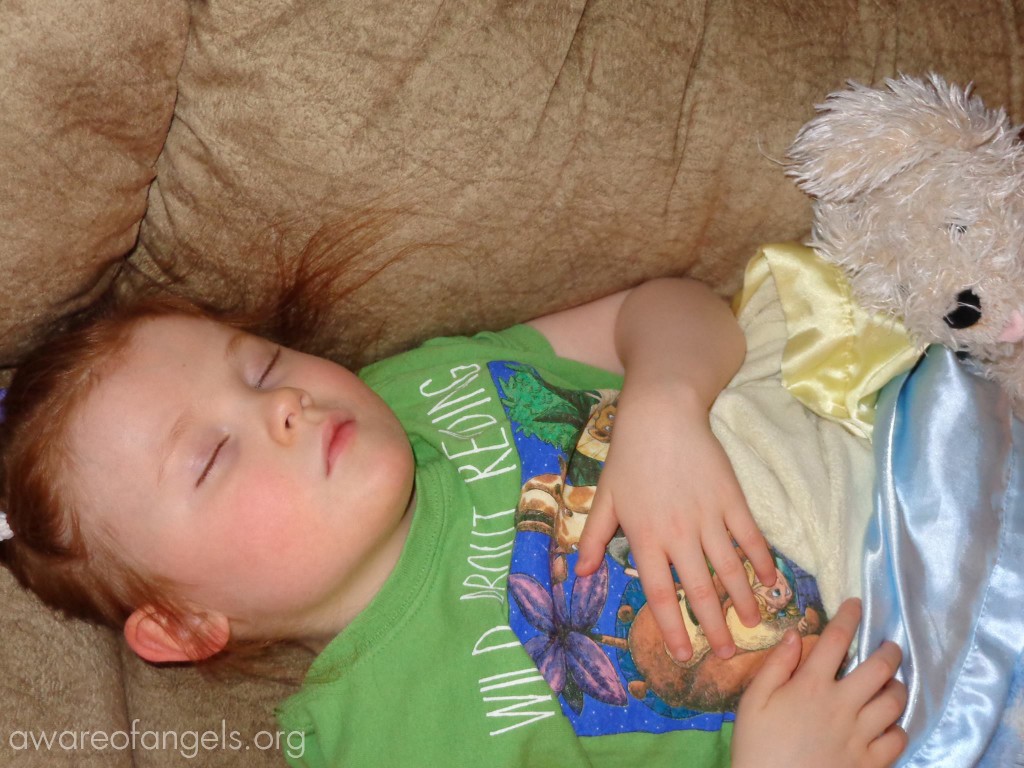 She is now old enough for school and we chose to do the 1st grade Life PAC curriculum for our homeschooling and I teach her.  Science, history, and language arts are wonderful for her and she loves them.  Her art is sometimes mean but mostly colorful and creative.  Gym is hard since her body doesn’t quite move like it should and her left side seems to be less able compared to her right side.  Her hands are very weak so even holding the pencil is very hard and her hands tremor so when trying to write sometimes she gets very mad at herself.  Math is really hard but she is starting to remember some of her math facts in addition and subtraction and can even add up to numbers in the thousands if the numbers are not too big.  Recently Julianne has had success in toilet training that we are over the moon about.  She can pee in the potty all day long now!  Even for road trips.  She is very independent for this too even down to the hand washing and turning off the light.  She is pretty forgetful but she tries so hard.  She also is eating a new food that I am makes me happy.  She is eating a little homemade organic hummus. Her other foods are goat milk, coconut yogurt, store hummus, sunflower seed peanut butter, pureed avocado, large variety of fruit smoothies, and still a little Gerber pureed food.  Julianne is very very tired and whenever I turn my back she is lip-rubbing her sleeves and trying to pass out.  I spend most of my day playing games, reading to her to help her eat her meals, playing board games, reading and taking her to museums and the library.  She loves to feed the ducks at the pond right now.  She flaps andhoos when she sees them eat the bread she threw.  It is kind of sad because she is giving them a food she never could eat.  Julianne also has space out seizures and has since birth dozens of times a day.  For 2 weeks after a flu she had medium seizures with twitching and then they went away. 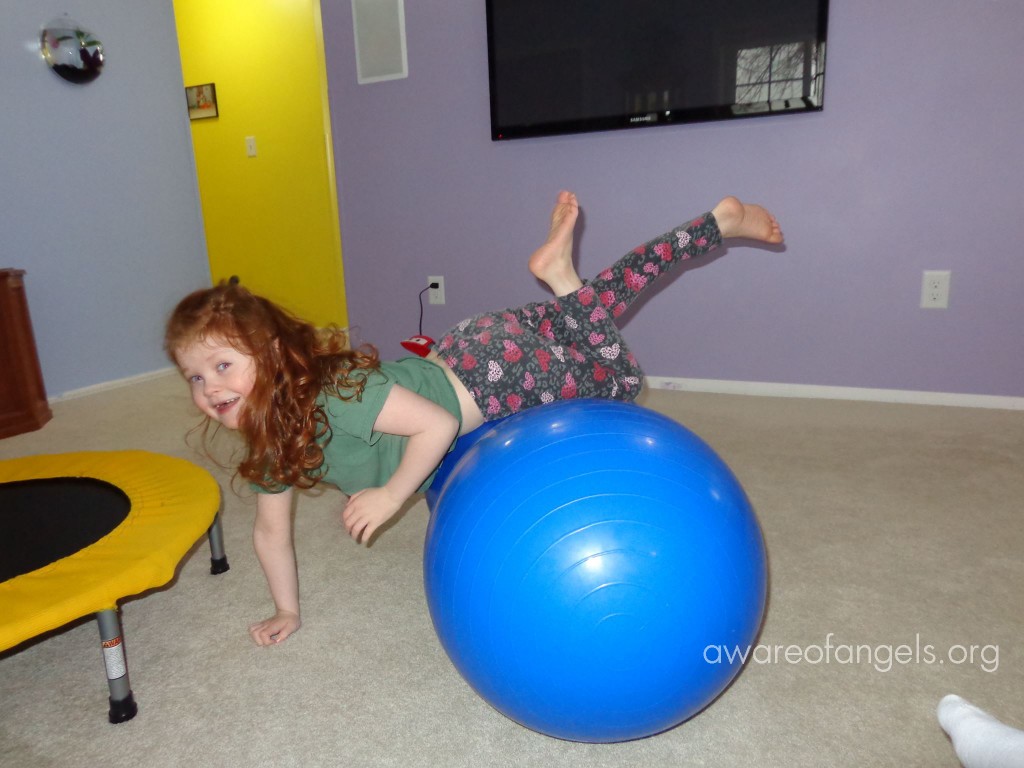 Julianne still is very sweet even though she has her terrible moments she says I love you mommy and she prays to God and says thank you for my ears for without them I could not hear.  She also asks God to help her with her madness as she calls it which always sounds so cute.  She is my only child and I love her very much.  This is what I do now.  i care and teach her the best I can.  Some days we just do face grabs and splats on the bean bag chair and big bear hugs to help with her sensory issues and other days are more productive with home-schooling and chores.  Even she has chores like putting away her own dirty clothes.  She is our little stink.