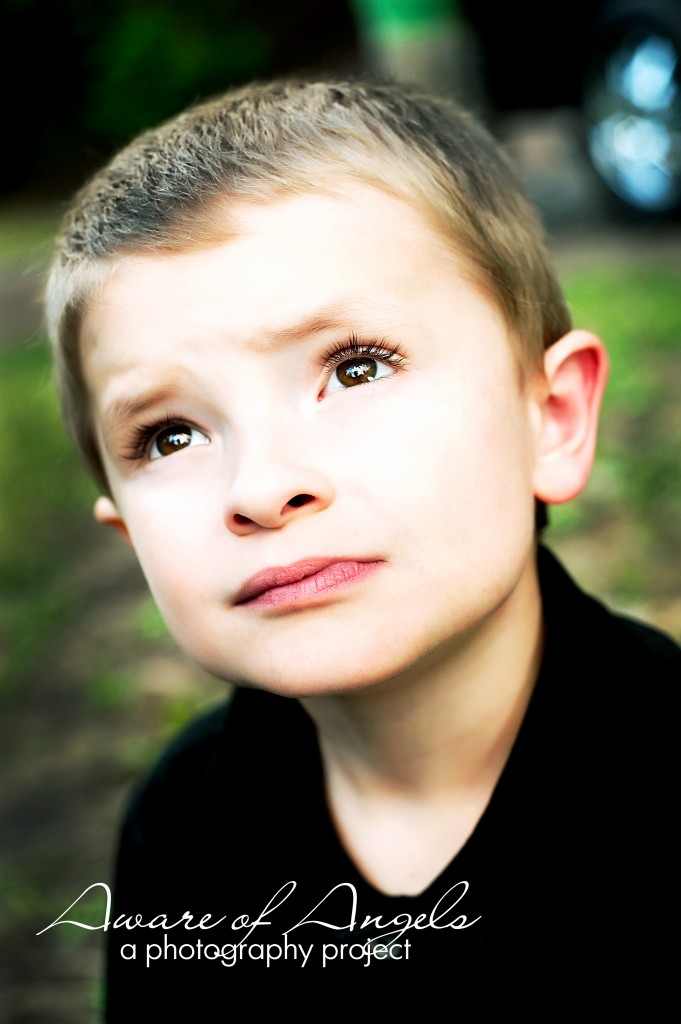 Samuel was given the label of “AUTISTIC” at the age of 2, though we still do not have an exact diagnosis due to fact that Sam is nonverbal and will not cooperate with the current tests available for autism.  Sam is not a typical autistic child, though I think most parents of autistic kids would say the same.  Autistic children cannot be wrapped up in a nice little package with a set number of symptoms and treatments.  Everyone of them is different and require different attention.
Sam did not develop normally until the age of 2 or 3 and then suddenly regress into the shell of autism.  He was born there.  My husband and I first noticed something was wrong when Samuel wouldn’t react to noises starting around the age of 2 months.  Fearing he might be deaf, we took our concerns to our pediatrician.  She snapped her fingers by his ears and informed us our baby was fine. Months went by and Sam continued to be developmentally delayed.  He had no curiosity about anything, be it toys or food or anything.  By 11 months he was not rolling over on his own, sitting up on his own, crawling, scooting, holding his own bottle, basically doing anything.  Sam had extra sensory issues in his hands, making touching anything extremely uncomfortable.  He had PICA habits, so we couldn’t take our eyes off of him for even a second when he was outside. He would cry constantly, breaking our hearts because we felt like failures.  I finally listened to the mommy instinct and found myself a new pediatrician.

Our new pediatrician referred us to DDI Vantage.  Over the next year Sam underwent occupational therapy, play therapy, music therapy.   From the very moment of his birth Samuel and I have fought together for every milestone, every step that most parents take for granted.  In order to get him to hold onto his bottle, I had to hold his hands on it the entire time he was drinking it to familiarize the feel of something hard to his sensitive hands. I had to beg, plead and weep to get him to eat anything but crackers and chips.  He was in the lowest percentile in every aspect due to his picky eating habits and he his severe constipation issues. I had to hold him up on a box and rock him back and forth to get him to sit up.  I had to consistently rock him back and forth while on his back to teach his muscles to roll over.  When he was able to be on his hands and knees without help I had to move his arm, them his leg, then his arm…teaching him how to crawl.  I wept uncontrollably when he first scooted across the room and touched a hard toy willingly.  He began to show more signs of autism, constantly rocking back and forth, stemming, and grinding his teeth, but he also began to make developmental progress.  It was slow, but it was progress. 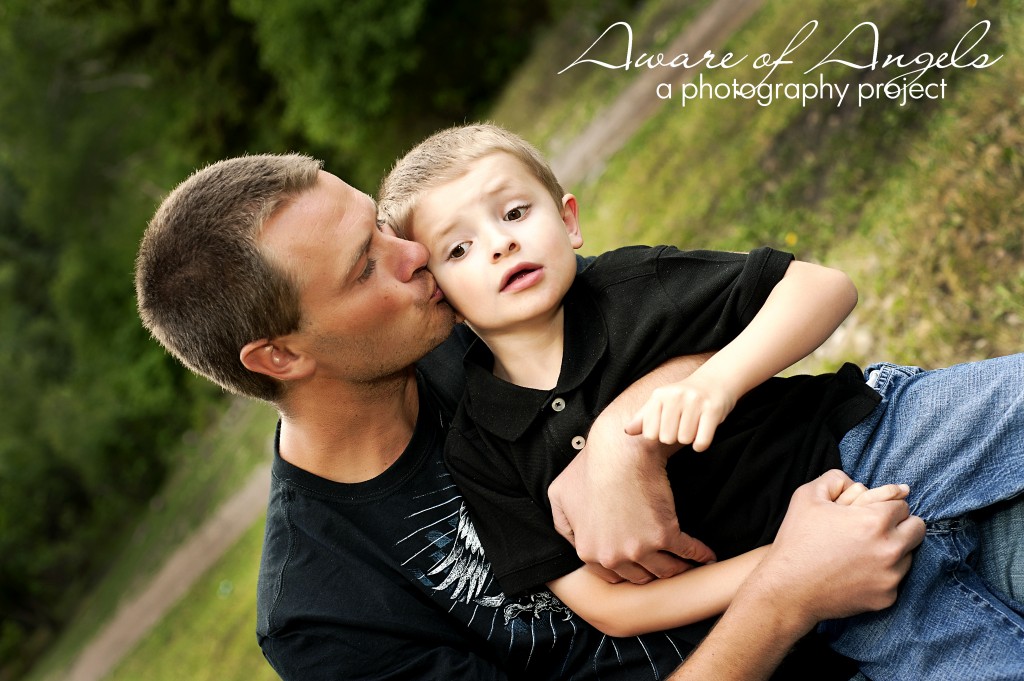 Though Sam was beginning to make Gross motor progress, I wanted to know what was happening with my son.  My exact thought was, if I can name the monster, I can control the monster.  DDI Vantage referred us to the Child Development Clinic near Primary Children’s Hospital.  There we saw Doctors and Psychologists that finally gave Sam the label I already knew…Autistic.  He underwent blood tests to check for chromosomal disorders.  They all came back negative.  They were also concerned about his hearing, so we did test after test to find out what was going on in his ears, only to find out Sam just didn’t care about the silly noises.  They meant nothing to him, so he refused to respond to them.
Sam eventually outgrew DDI Vantage, moving on to Early Intervention Services.  He went to preschool twice a week.  There I met his teacher, a mother of an autistic son herself.  She introduced me to the world of DAN (Defeat Autism Now) Doctors and Gluten free/Casein Free diets.  We decided to give it a try.  I started him on a gluten/casein free diet, much to the scorn and nay saying of my extended family.  Though there wasn’t an a miraculous healing of his autism, his moods and behaviors became easier.  I’d never noticed how miserable he was until I met this new little ray of sunshine.  Our Dan Doctor had us do an intolerance test for foods that might be causing him further problems.  Sam’s list came back with a great deal of foods on it, making an exclusion diet hard, but not impossible.  Especially since we had already cut out gluten and casein.  Next we did a Heavy metals test to check the heavy metal content in his body.  Sam came back high in several metals, including Lead and Mercury.  We began Chelation Therapy to remove these metals from him.  We also began Candida treatments to remove the yeast overgrowth from his intestines.  Sam’s mood began to really improve, his stomach flattened out due to the slow removal of gas from his abdomen.  We did blood work to test what enzymes his body was especially low on and had specialized vitamin supplements made to replace what was missing.  We also did a 3 month series of vitamin B-12 injections. Though a great deal of good came from this time, we also had our share of scares.  We found out Sam was allergic to cod liver oil.  We found out that probiotics caused him to have mini seizures, resulting in several injuries. 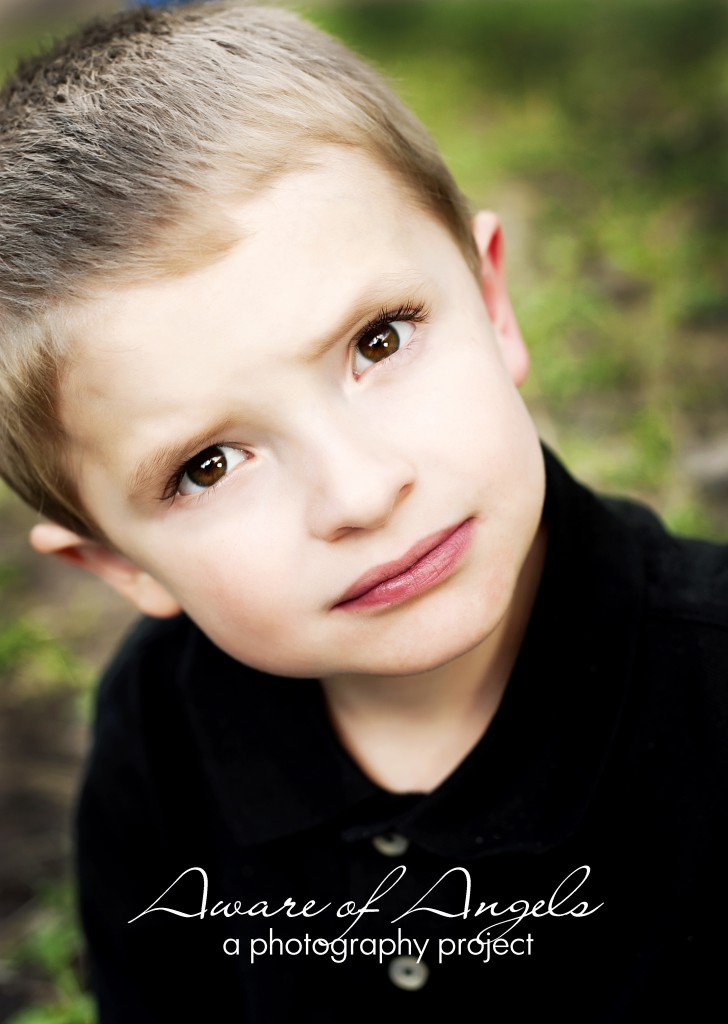 Its been several years since we started all of this.  We are still fighting the battle everyday against autism. My biggest hope for the future, the one thing I want more than anything, is to hear Sam’s voice.  The hardest part about having a nonverbal child is not being able to ask him what is wrong when he is upset.  He can’t tell me where it hurts when he doesn’t feel well.  He doesn’t always give me a sign, like holding his stomach or ear.  I have to make the best guess possible, and that’s not easy.   I hold out hope everyday that Sam will find a way past the wall that keeps his voice hidden.
Another thing that would really help families with autistic children is access to more DAN Doctors and insurance coverage of the therapies they offer.  Most traditional doctors do not give any credence to nutrition therapies.  They scoff at exclusion diets, pushing more and more drugs at families that are desperate for answers.  I paid out of pocket for every single visit/therapy my son has done under his DAN doctors.  It was worth the cost, but for families that are less fortunate than I am, these visits and therapies might not even be possible.  I would love if we could have more doctors that would dedicate their lives to finding solutions to the symptoms of autism instead of bandaide solutions.  If pediatricians banded together, doing more research, having an open mind to the different solutions DAN Doctors are already trying, we could do so much more in the fight against autism.
Samuel’s constipation issues are all but gone.  Sam is far less picky, realizing food is his best friend, no matter what form it comes in. He is still on a gluten/casein free diet.  He really wants to cheat, but having been off of them for so long, any long term exposure to them makes him nauseous.  His stemming and rocking behaviors are far less noticeable, though he still does them when he is overwhelmed by to much stimulation.  Samuel thrives on being tickled and wrestled with, needing the pressure to feel calm.
He is still nonverbal, but has found ways to communicate with us what he needs.  He is a typical little boy.  He has tantrums when he doesn’t get his way, and he’s a tease to no end.  When he wants your attention, there’s no way you can misunderstand.  He puts his face right in your face and smiles. And when he smiles, you can see his very soul shining out from his face. He’s a favorite no matter where he goes.  One good day with Samuel makes all of the rest of the days worth enduring.  He is the very best part of our family, having all of us wrapped so tightly around his little fingers.  He radiates love, and I cannot imagine life without him.
Amelia-2q23.1 Microdeletion Syndrome