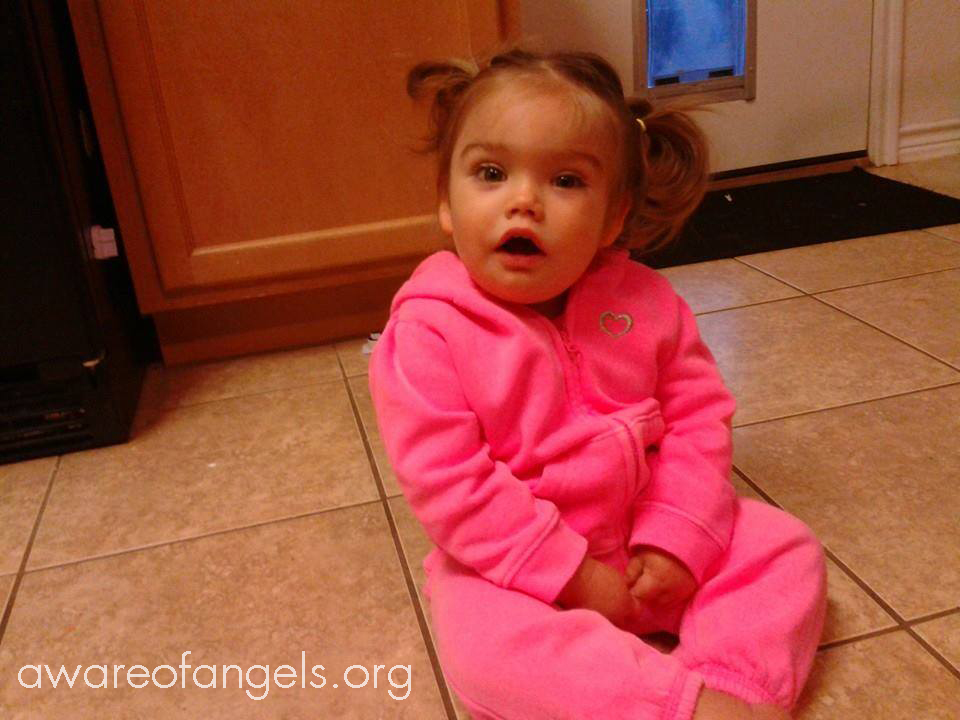 My husband and I were so excited to have our third baby on the way.   Mya was 5 years old and Frankie was 2 years old at the time.  I was very tired this time around from keeping up with those crazy kids.  At 30 weeks gestation Zoey’s placenta had started to tear from my uterine wall.  We didn’t know it had torn at the time but I was put on bed rest for bleeding.  At 35 weeks, after steroid shots for lung development, I was allowed to move around.  That day my water broke and I started to bleed rapidly.  After about eight hours of labor the midwife called in the OB/GYN on call to do an emergency c-section.  Zoey’s placenta was shredded beyond belief.  It is a miracle that she lived those last five weeks.  She was having a little trouble with tachycardia (rapid heart rate) and hypoglycemia so she went to the NICU while I was sewn up.  I had lost a lot of blood so I wasn’t really aware of what was going on around me for about 24 hours.  In that time the NICU nurses discovered that Zoey had a bit of re-flux.  I was assured that this would go away in a few weeks as she matured.  In addition she had a poor suck which was attributed to her being late pre-term.  I was told to nurse her and supplement with formula until my milk came in.

One week later at her follow up appointment Zoey had not regained to her birth weight.  I attributed it to her severe re-flux.  Every time she nursed she would projectile re-flux.  She had dairy induced colitis.  I went off of dairy and soy and it seemed to get better but what I didn’t realize was that Zoey was eating less.  She was too tired it seemed to be able to nurse effectively.  I tried a supplemental nursing system but she couldn’t coordinate her suck and swallow with the little tube in her mouth.  Finally, after struggling for three months to get her adequate nutrition to grow I turned to doing all her feeding except one via a bottle.  That’s when I realized something was VERY wrong.  It took Zoey one hour to drink 2 oz of breast milk by bottle.  I took her to a speech therapist and they said that she seemed to have a high palate and prescribed a special nipple for her to drink with.  It took her 45 minutes to drink 2 oz with the change to that nipple.  Finally, though, she started to grow again.  She gained some weight and grew in length.  I was happy to know that my little nursling who would give me a smile when she nursed to sleep at nap-time and nighttime was thriving on my milk via bottle throughout the day.  Then the pediatrician told me that her head had not grown at all.  He said that her head should have started to grow first.  He recommended going to the geneticist.

The geneticist pointed out a few features that I had already noticed about Zoey that I thought were abnormal but were dismissed by the pediatricians at the hospital when she was born.  She had a misshapen skull, almond shape eyes, a tented lip, a tucked chin, and fat little feet.  The geneticist also pointed out her sandal gap toes, spindle like fingers, and her short pinky finger and thumb.  She thought maybe she had a syndrome.  She also noted Zoey’s sacral dimple and sent us to the Neurologist for evaluation.  They drew blood on Zoey to check her for chromosomal abnormalities.  It would take one month to get the results back!

One month!  I was a mess.  I cried daily from the stress of not really knowing what was going on with my baby girl.    My three year old son, Frankie, and my six year old daughter, Mya, thought I was crazy and rightly so.   Zoey took it all in stride.  She still wasn’t rolling over, lifting her head during tummy time, or laughing but she did smile!  She was now on Prevacid for reflux which took away the acid but didn’t prevent her from refluxing.  She now developed constipation as a side effect of the Prevacid.

Around one month out from our genetics appointment we visited the neurologist.  He stated that Zoey was hypotonic in her upper extremities but had excessively tight lower extremities with limited joint mobility.  He ordered an ultrasound of the spine to evaluate her sacral dimple.  At the same time he told us that Zoey’s genetic tests came back abnormal.  He actually told us incorrectly that she was missing the genes located at 2q22.3 and 2q24.1 (boy was the geneticist ticked off when she found out he read us the results and read them wrong).  Well, I asked for a printout of the results and called the geneticists for an appointment to discuss the results.  I took the printout home and showed it to one of my friends who is a genetic counselor.  She correctly told me that Zoey was missing all of the genes from 2q22.3 through 2q24.1 on one of the pairs of chromosome.  I then looked this information up on OMIM and found on my own that 2q23.1 microdeletion, located within that large deletion, is associated with mental retardation.  I am so thankful for finding this out before going to the geneticist.  I cried for hours.  I grieved for days.  I showed my husband and he was able to work through his feelings before the appointment with the geneticist and was able to hold back tears while we were in the office.  It allowed us to be prepared with questions for that appointment.  The geneticist said that although the syndrome that Zoey has is typically a microdeletion (only that particular gene is deleted) that Zoey actually has a macrodeletion and was missing a large amount of DNA, 7.29 MB, and that only time would tell what additional impacts this would have on her life.  We knew after the appointment that our lives were forever changed.

Meanwhile the results of the ultrasound showed that Zoey’s spinal cord was tethered and would require surgical treatment.  An MRI of her brain and spine confirmed the tethered cord but also showed that Zoey has an underdeveloped frontal lobe and non-focalized speech centers.  All this explained her poor motor skill development, her poor feeding skills, and her lack of babbling.  However, Zoey proved to us that she can laugh and starting laughing at about six months old.   She even laughed twenty four hours after her spinal surgery at 11 months.  She recovered well and suddenly rolling and sitting became easier for her.  She still had tight hamstrings but they began to loosen up.  Her constipation issues began to resolve as we put her on the toilet after meals to stimulate defecation.  We believe that her spinal surgery also helped her constipation by correcting the nerve conduction through the spine to her bowels.

At 15 months old Zoey was essentially a six month old.  She could sit but could not pull herself to a sitting position.  She could roll but did not roll to get to where she wanted to go.  She could feed herself small pieces of soft foods but had problems with chewing.  She liked to mash the food with her tongue instead of her gums and food often fell out of her mouth.  She took 20 minutes to drink a 4 oz bottle and couldn’t sip through a straw or drink from a sippy cup.  She refluxed 20+ times a day.  We called her the volcano sister because she was always erupting.  But you know what Zoey did do at that age?  She played with toys, she ate toilet paper when we were not looking, she pulled our hair to hear us scream, she loved to play peek-a-boo, she would gives kisses and hugs, and she laughed the best laugh in the world.

Zoey is now 27 months old.  A two year old!  She is developmentally 6 months old verbally, 10 months in her receptive language skills, 10 months old in fine and gross motor skills.   She can now crawl, although she prefers to drag one leg and hop like a frog.  She can pull to standing and will stand for 1 or 2 seconds before she drops to the floor.  She can feed herself finger foods but still chokes sometimes.  She can’t use a spoon or fork.  These are just banging tools to throw!  Ha!  She still mashes food with her tongue if its soft food but uses her teeth to chew crunchy foods.  She takes 10-15 minutes to drink 4 oz from a bottle.  She can sip a sippy cup but spits the liquid out because she is unsure what to do with it all in her mouth.  She refluxes about 20+ times a day but is able to swallow most of the time and really only spits out six times a day.  We call her “snail” now because she will drag her leg through the spit up and leave a streak on the floor.   She doesn’t run at the park, or slide, or swing.  She is scared by loud noises, people yelling, and choirs singing.  She can’t tell me what she wants and is easily frustrated.  But you know what Zoey can do?  She spills the trash every day and dumps the dog water out.  She always poops in the toilet!  Woohoo!  She says, “Mamamama,”when she hugs me and we think she is saying, “Babababa” for Papa.  She still loves to play peek-a-boo, she gives kisses and hugs, and she laughs the best laugh in the world.  She is still so much a baby. We have to wait to see her grow up.  Usually these baby and toddler years slip by so fast.  Someday she will be a big girl but she will get there at her own speed. She is our perpetual baby but she is our blessing, our sweet baby girl!